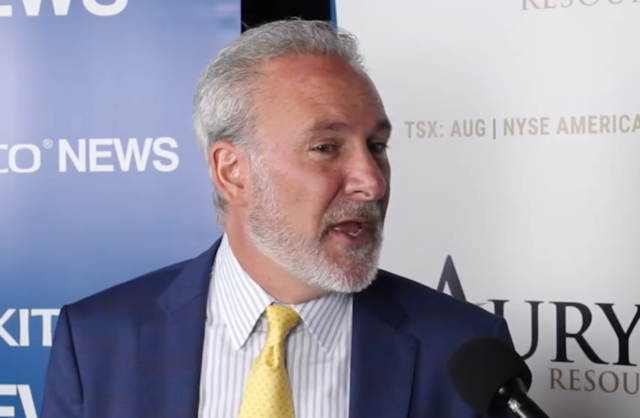 Following yesterday’s revelation that gold-bug, Peter Schiff, had $100 worth of Bitcoin, people have been sending him more. In his latest podcast he explained that he regrets not buying BTC when he first heard of it, and why this doesn’t make him a hypocrite.

Schiff Regrets Not Buying Bitcoin At $100

Since Schiff’s Bitcoin ownership became public, he has faced a barrage of criticism for being a hypocrite. Well don’t worry Peter, that’s not going to happen here.

Addressing the criticism, Schiff explained that he regrets not buying Bitcoin at under $100 when he first heard of it. However, he pointed out that he would be a fool not to regret that. After all, he could have made a lot of money if he had bought Bitcoin then.

He also suggested that notorious Bitcoin-skeptics like Warren Buffett and Nouriel Roubini, probably also regret not buying Bitcoin at sub-$100. Again, they could have made a lot of money if they had.

But if he had bought Bitcoin back then, he says he was unlikely to still be HODLing it, as he would likely have sold it for a profit at some point.

Discussing his Bitcoin ownership, Schiff revealed that he had received that initial amount from ShapeShift CEO, Erik Voorhees.

Following a debate, the pair went out for dinner, and Voorhees took Schiff’s cellphone, installed a wallet and transferred him $100 of Bitcoin. Schiff transferred $50 back and kept $50. This dropped in value and then rallied to the $100 that he admitted to owning.

The interaction did impress Schiff with the ease and speed at which Bitcoin can be sent. He explained:

I think it is kinda cool that you can send it very quickly. I’ve always admitted that that is one of the good features of Bitcoin.

Following his ‘outing’ by Anthony Pompliano, along with the offer of another $100 of Bitcoin if he provided his wallet address, Schiff says that he has now collected £2140 worth. This has been donated in small value transactions by many in the bitcoin community.

Interestingly, at the time of recording the podcast, Pompliano had not sent his offered $100, as the donations had all been for smaller amounts.

Those hoping that bitcoin ownership will convert Schiff into a Bitcoin fan, are likely to be disappointed. He still believes that the underlying value of the Bitcoin is zero, and he does not intend to buy any for himself.

However, he does encourage people to send him more free Bitcoin and wondered if he could collect a whole one.

Out of respect for the people who have sent him the Bitcoin, Schiff intends to HODL it, so that his supporters can track its value.

If the Bitcoin he has been donated doesn’t convert Schiff himself, perhaps some of his followers may take an interest as the price begins to rise.

What do you think about Peter Schiff’s intention to collect 1 Bitcoin? Share your thoughts in the comments below.